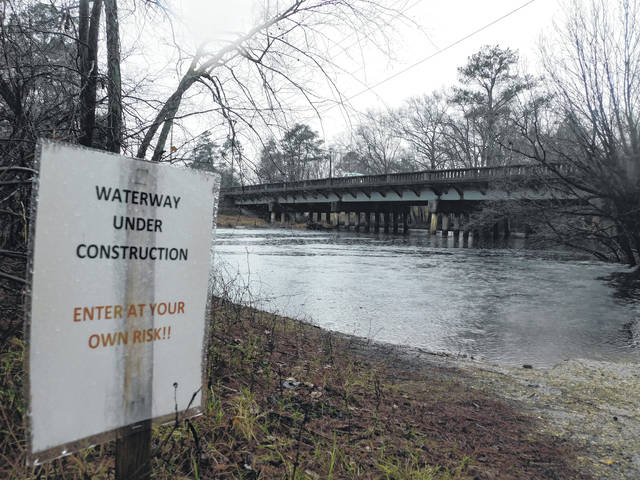 Shown is the Lumber River as seen from under the Second Street bridge in Lumberton. Robeson County is under a flood warning until further notice, according to the National Weather Service office in Wilmington. The Lumber River’s water level hit 12.88 feet on Monday and is expected to rise. The flood level is 13 feet.

LUMBERTON — The city is under a flood warning until further notice.

The National Weather Service office in Wilmington issued the warning at 9:03 a.m. Monday. The rainfall experienced in Robeson County since the beginning of January has caused the Lumber River to rise, and minor flooding is expected.

“People with interests along the river should take the necessary precautions to protect life and property from the flood waters,” the NWS warning reads in part.

The river’s water level at Lumberton hit 12.88 feet on Monday, Mike Kochasic, a meteorologist with the NWS office in Wilmington, said late Monday afternoon. The flood level is 13 feet.

The river’s water level should fall after that, level off at about 13.1 feet and stay at that level until Thursday or Friday, Kochasic said.

On Monday, Lumberton had seen .59 inches of rain as of 4:45 p.m., he said. That rainfall contributed to a soggy month in the city. As of Sunday, 2.03 inches of rain had fallen on the city. The total comes to 2.62 inches with Monday’s rainfall added in.

The rain is expected to continue through Wednesday night.

“We will continue to monitor it,” she said.

The North Carolina Highway Patrol and the Lumberton Police Department reported no problems caused by the weather on Monday.

“We haven’t even had any accidents,” police Capt. Terry Parker said Monday afternoon.

The National Weather Service forecast for Robeson County calls for the chance of rain and thunderstorms to continue through Wednesday night. Rainfall amounts are predicted to be one-tenth to one-quarter of an inch each day, with heavier amounts during thunderstorms. Patchy fog is expected Tuesday morning. Highs each day are forecast to be in the low- to mid-70s, with low temperatures in the low 60s.

The Thursday forecast is for partly sunny skies and a high near 68. Friday is predicted to be sunny with a high near 54.

The chance of rain and showers returns Saturday. The high temperature is expected to be 64.

MAXTON — The Maxton Board of Commissioners on Tuesday approved a contract for a new town attorney. Jessica Scott, an associate with the Lumberton-based law firm Locklear, Jacobs, Hunt & Brooks, was praised by Town […]

PEMBROKE — Lumbee Tribe Chairman Harvey Godwin Jr. and three members of Robeson County’s state legislative delegation said Friday they are not ready to throw their support behind a Tribal Council resolution calling for the […]

RED SPRINGS — The Red Springs Board of Commissioners on Tuesday learned that two proposed fixes for issues with the town’s drainage ditch near Layton and Thurlow streets were not affordable. The elevation difference between […]