“Lt. Wright is home. We reunite him to the American soil upon which his house still stands. The soil he once played on as a child and walked on as an adult” 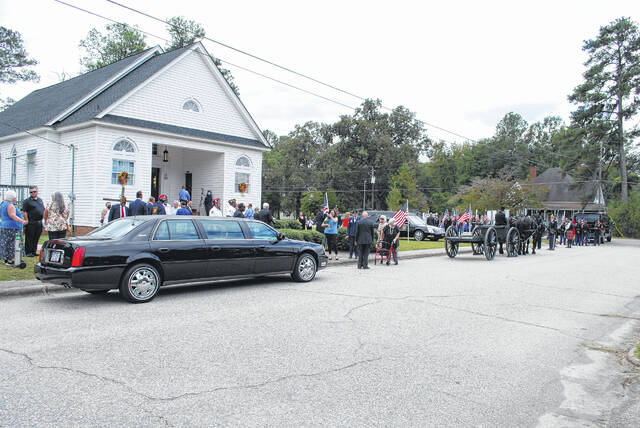 Shown is the crowd by Lumber Bridge Baptist Church Tuesday afternoon just before U.S. Army 1st Lt. James Earl “Dick” Wright was transported from the church to the Oakdale Cemetery in Lumber Bridge. Wright returned Tuesday to Lumber Bridge for burial in the cemetery. He was killed in action during World War II. 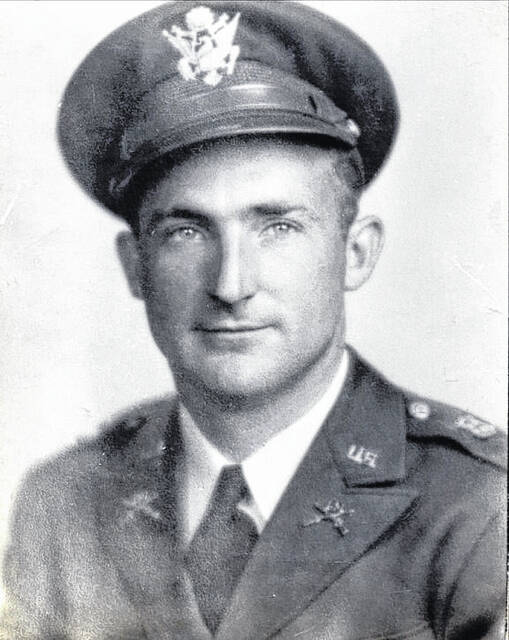 LUMBER BRIDGE — “He is home. He is back in the land he fought to save, a country he carried in his heart while valiantly serving in a land that was not his own, liberating people he did not know.”

Those are the words spoken Tuesday afternoon by U.S. Army Chaplain Lt. Col. Douglas Alan Windley at the funeral service of U.S. Army 1st Lt. James Earl “Dick” Wright. The soldier was killed in action in 1944 while gathering bodies of wounded soldiers during WWII by the Moselle River near Dornot in France.

He was born in Parkton on Oct. 16, 1918 and was a member of Lumber Bridge Baptist Church and the Parkton National Guard. Wright grew up in the Lumber Bridge area.

A little more than 77 years later, he was honored for his service and buried in his hometown.

Wright was first listed missing Sept. 10, 1944, and declared “non-recoverable” by the American Graves Registration Command in 1951.

He was recorded on the Walls of the Missing at the Lorraine American Cemetery in France where his remains, while unidentified, were buried. He was officially accounted for on July 9, according to an announcement by the Department of Defense Prisoner Of War/Missing In Action Accounting Agency on Sept. 24. To identify Wright, DPAA scientists used DNA, and dental and anthropological analyses.

“Lt. Wright is home. We reunite him to the American soil upon which his house still stands. The soil he once played on as a child and walked on as an adult,” Windley said.

Several people attended the funeral service at Oakdale Cemetery in Lumber Bridge including Robeson County Commissioner John Cummings. In addition, some community members could be seen watching the funeral procession from the roadside of N.C. 20, and from their front porches and yards. Some Lumber Bridge residents even waved flags as the procession passed.

Several veterans walked in front of the funeral procession.

“This was definitely an honor, not only to be here, but to participate,” said Clifton Bell Jr., commander of Rufus McLaughlin American Legion Post 177.

“You know, it’s sad when we lose a fellow comrade, but we know in war, there is gonna be death,” he added.

The service was also special to Reggie Sawyer, a retired member of the U.S. Marine Corps.

“For me, it’s laying one of our heroes to rest,” said Sawyer, who also servies as senior vice commandant of Shawn Knisley Detachment Marine Corps League.

Sawyer also said it was an honor to represent veterans that couldn’t attend the service.

Members of the North Carolina National Guard presented flags to members of Wright’s family including Diana Merkt, his niece. The NCNG also played “Taps,” presented the rifle volley, and facilitated the Folding of the Flag during the service.

Merkt is the daughter of Wright’s last living sibling 100-year-old Florida resident Elizabeth Wright Harper who could not attend the service.

“It’s one of those things that you just can’t describe,” Merkt told The Robesonian after the service.

However, it was an emotional experience, she said.

During the funeral service, U.S. Air Force Staff Sgt. Sidney Brookman read aloud the last letter her great-grand uncle wrote to his late wife Margaret before his death. Prior to the service, Brookman escorted Wright’s remains from Nebraska to North Carolina. He arrived in Fayetteville on Friday.

Brookman called the service a “beautiful” experience and said she was honored to bring Wright home. She also was grateful to help share his story and witness the support shown by Lumber Bridge community members in attendance of the funeral service.

“It’s been incredible,” she said.

Also during the ceremony, a proclamation by Gov. Roy Cooper was read aloud that designates Oct. 8 as 1st Lt. James E. Wright Day across the state.