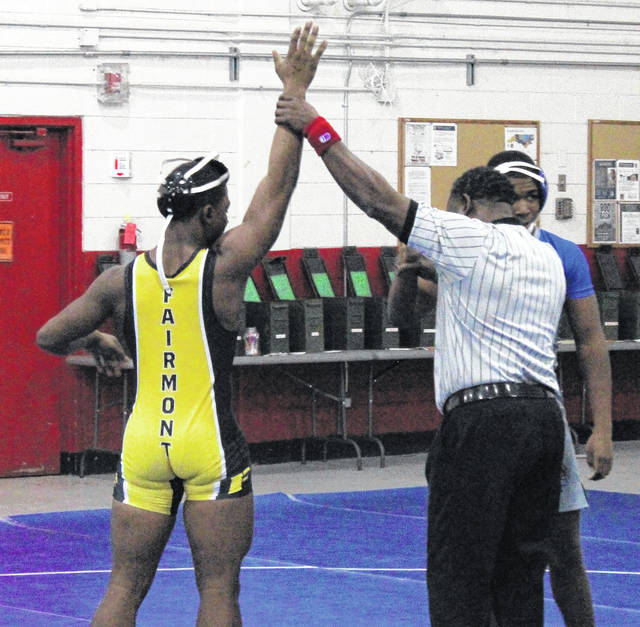 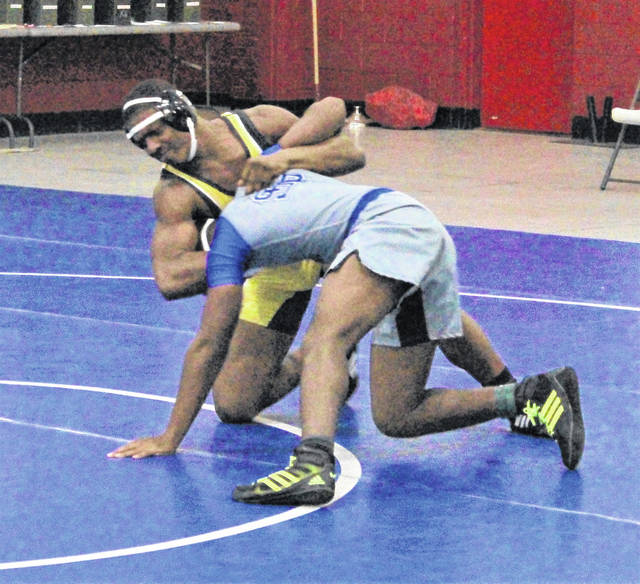 Jonathan Bym | The Robesonian Fairmont’s Derrick Baker searches a takedown against St. Pauls’ Onye Igbokwe last Thursday at St. Pauls. Baker, who wrestled up until middle school, has made the most of his first season of high school wrestling in Fairmont’s first season on the mat, sporting a 31-1 record.

FAIRMONT — Transitioning from one sports season to another can sometimes be an obstacle for athletes, requiring days or weeks to get acclimated to the mental and physical changes between sports.

On just a few hours of sleep, and several years apart from wrestling, Fairmont sophomore Derrick Baker’s transition was immediate, and without a practice session to prepare. As the starting running back for the Golden Tornadoes on Nov. 14, Baker traded his helmet and cleats for headgear and a singlet overnight for a wrestling tournament at Terry Sanford on five hours sleep.

“When I first came in after the playoff game the next morning I had to go to Terry Sanford. The hardest was my conditioning. I was tired,” Baker said. “That first match, I was fixing to get beat, but I thought to myself that I can’t let myself get beat. It’s a mind thing and I finished the match.”

Like riding a bike, Baker has shown he hasn’t forgot how to wrestle, and that first moment walking into the Terry Sanford gym on Nov. 15 refreshed him mind to the sport he start at 5 years old.

“As soon as I got there and seen the mat, it just hit me all over again,” Baker said. “I was nervous, but I knew never to fold under pressure.”

The event was the first high school wrestling match for not only Baker, but the rest of the team as the Golden Tornadoes have embarked on their first wrestling season this year. Numbers of wrestlers have been sparse, teaching athletes a grueling new sport is hard, but the one constant has been Baker.

“I’m always telling people that he’s built different. A lot of kids mindsets these days aren’t as strong, but him, he’s a competitor,” Fairmont coach Justin Sweet said. “If we had to wrestle 24 hours straight, he would be ready to go. We had one tournament and he was sick as a dog. He still wrestled all five matches and won all five matches.”

Baker’s experience has made him the headliner for the rookie wrestling program, but his record is one that no other wrestler in Robeson County has had up to this point of the season. He started the season 29-0 before suffering first loss over the weekend at the Boneyard Bash and currently sports a 31-1 record.

An avid wrestler in his youth days, Baker, despite the hiatus, has shown that the techniques and fundamentals he learned as a kid weren’t lost, but needed some coaxing out from his memory bank.

“I want to thank my coach for getting my mind refreshed back to what I used to do when I was younger and make it come back into my mind,” The 182-pounder said. “He makes me sharper everyday I go back to practice.”

Practices for Fairmont also brings out another side of Baker. Not the fierce competitor that his opponents see, but the instructor for his teammates that are learning the sport.

“When I’m at practice, I really focus on them and making them better and I know it’s hard,” Baker said. “When I was younger, I used to want to quit because I used to get beat. I was the underdog, but now I guess I’m one of the top dogs. Helping them out makes me feel better. It’s something I never had when I was coming up.”

The peer instruction has also been the origin for Baker’s nicknames: Coach Baker or Coach Derrick.

“He always helps out and he’s a big plus, especially since we don’t have an assistant coach,” Sweet said. “It just shows everybody what they are capable of. He sets the standards high so everybody else can follow along and get to where he’s at.”

This season has been a reunion with the sport, and the camaraderie with former teammates of his now at Lumberton, whom he wrestled with in the Lumberton Seadogs organization under Billy Roach.

“When we go against each other, they are my opponent, but after the match I see them as my brother,” Baker said.

With the novelty of wrestling at Fairmont starting to wear off midway through its first season, Baker now has set his sights on accomplishing more firsts for the fledgling program.

“This is my chance. This year could be the chance to put a banner on the wall for my high school,” Baker said, but also mentioning another goal of his. “My goal is to make my teammates better.”