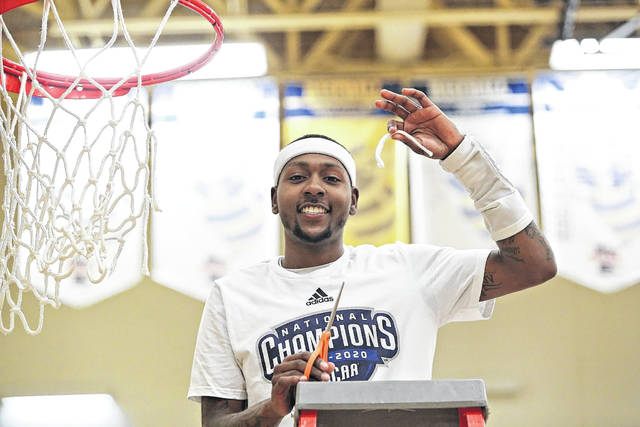 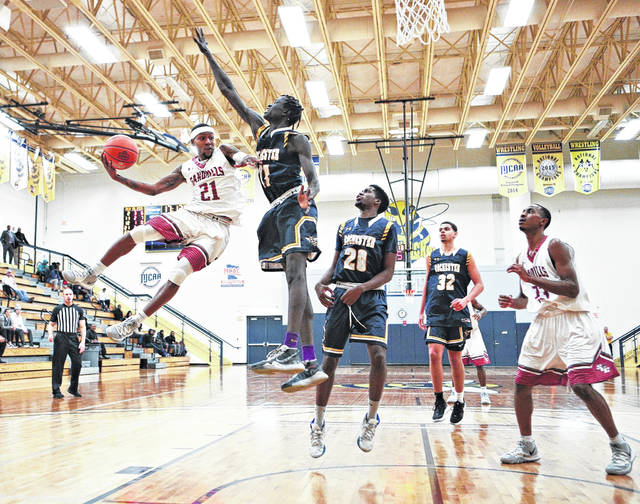 ROCHESTER, Minn. — Of all the men’s basketball played at the college level in the 2019-20 season, only the Sandhills Community College basketball team can say they are national champions.

The Flyers claimed the National Junior College Athletic Association Division III national championship last Friday in Minnesota, beating the threat of the COVID-19 that swept across the country late last week and three of the top junior college programs in the country along the way. The viral outbreak led to the cancellation of postseason championships for all three NCAA divisions as well as NAIA and the top two divisions of the NJCAA.

“It’s really crazy that we can actually say that a JuCo from North Carolina is the only college team to win a national championship this year. It’s surreal really,” said Fairmont graduate Corry Addison, who was the starting point guard for the Flyers.

“I really couldn’t believe it really. I just sat on the bench; I didn’t jump around or nothing.”

The national crown was the program’s second national title, with the other coming in 2012, but the situation around this title makes it different.

“We are it, as far as national champions for 2020 in college basketball, so that’s going to get some looks and I guess we are the only school that will go down with no asterisk beside 2020,” Sandhills coach Mike Apple said.

“When you are fortunate enough to win the last one, especially the national championship, it’s something you can sit back and savor. That’s exactly what we are doing right now.”

Sandhills was ranked at or near the top of the NJCAA Division III basketball poll for much of the season, and finished with a 34-2 record. Much like many sports trying to get tournaments in before the COVID-19 postponements and cancellations, the NJCAA made changes to the championship hours before the start of the quarterfinals. The 12-team tournament was scheduled to stretch the entire weekend, but was condensed to four rounds being played in two days. Ranked as the top seed with a first-round bye, the Flyers only had to play three games over Thursday and Friday.

Conditioning was a factor in the amount of games in a short time, but Apple and Addison said preparation set Sandhills apart.

“The guys do pride themselves on being the best conditioned team that they ever face. When we learned that we would have the opportunity to play two games on Friday, they honestly felt like that was something that made us a favorite because our conditioning was such that they didn’t feel like they would get tired,” Apple said.

“It helped a lot. Now we saw what we had to do in practice and it just paid off,” Addison said. “In practice we run a lot, preseason we run a lot and in the spring we run a lot. I think we were all around the best conditioned team up there so that played good in our part.”

After defeating Herkimer College in Thursday’s quarterfinals, 65-55, the Flyers got the early semifinal game on Friday and defeated Rochester Community and Technical College, 84-76, to set up a meeting with Mohawk Valley Community College in the title game. Addison scored in double figures in the first two games, while also doing his part to facilitate the offense as a point guard.

“He played really well in the quarterfinal game, he played good in the semifinal game and the championship game he didn’t score (until late) but he handled the ball just great,” Apple said. “They put pressure on us late and he did a great job of handling the pressure and had 10 assists so he did a good job of directing our offense.”

Addison scored four points in the championship game, but his final two at the free-throw line with less than two seconds left put the game on ice to claim the 93-89 win. Those two free throws came after he missed the front end of a 1-and-1 one minutes earlier.

“I just remembered what I came there to do. In high school I was a late-game closer at the free-throw line and I just remembered those days and all the free throws I shot in the gym by myself,” Addison said. “I was telling myself, ‘You can not miss these. You can not miss these.’ I knew for a fact I didn’t want that burden on me if I missed those free throws and we lost.”

The 10 assists were a game-high, and even though shots weren’t falling, he let scorers like West Bladen grad and tournament MVP Sayaun Dent take over with his 27 points.

“I felt like I was doing my part as a point guard, playing defense and controlling the tempo of the game while looking for others to score,” Addison said. “At halftime I told Sayaun to do what he does best and score the ball and I looked for him. He came up real big.”

Addison finished the season leading the team averaging nearly five assists and over two steals per outing during his freshman season. He also was the team’s third leading scorer a 9.5 points per game, but his mark was left on the defensive side of the ball.

“That was the thing that really separated us from other teams was our ability to really turn up the defensive pressure when we needed to,” Apple said. “Corry was just great at it. He does a great job of anticipating passing lanes and getting his hand in the way. A lot of times it’s hard to steal the ball while the other guy is dribbling the ball. It’s easier when you can anticipate and steal passes, but he has that ability to strip you and take the ball away while you’re dribbling.”

The 2018 Robeson County Player of the Year at Fairmont was well known for his defense, and Addison signed out of high school to Fayetteville State. Changes with the program left Addison looking for a new home, and Sandhills fit the build for what he was looking for.

“Everybody knows that Sandhills plays fast and coming from where I went to high school where we had a pretty fast team, I think everything just fell right into place,” Addison said. “Defense-wise Coach Apple thrives on playing defense. If you’re not playing defense the right way, we run and nobody wants to run after a long day of practice. Everybody just focused more on defense and that was a rollover from high school.”

With one ring on his hand and another year of eligibility at Sandhills coming, Addison said the focus is already on next year for him and many returners, as well as the addition of a familiar face in Red Springs graduate Keagan Brayboy, who redshirted this season. Brayboy served as the team’s manager on the trip to Minnesota.

“We was the youngest team in Minnesota and (repeating) is what we are talking about now. All the returners are in the group chat talking about how we can definitely get there,” he said. “Keagan is a gym rat. We practice two hours a day and he practices hard and right after practice he’s in the gym. I definitely know I can rely on him next year to help get us there.”

PEMBROKE — In a battle for first place in the Peach Belt Conference, The University of North Carolina at Pembroke men’s basketball team used a big second half to defeat USC Aiken, 109-89. The Braves […]

From Robeson County, to the NBA arenas around the country, to basketball fans all around the world, tributes poured in for basketball icon Kobe Bryant from Sunday afternoon into Monday. Bryant, his 13-year-old daughter Gianna, […]